These case studies are intended to show the power of the Profit First method to cash management, and while they are actual results, they don't mean you will necessarily see the same in your business. When someone asks me "What will my results be?", my answer is always, "It Depends". In my experience the number one factor in achieving peak profitability is being committed to the process, disciplined in your implementation, and unwaveringly consistent in application. We can't control the economy or business cycles. But when you control what you can control - your focused actions - you will succeed. The case studies below are presented three different ways. I did that because some people like to look at a lot of numbers, and some people don't. Business names have been changed to protect privacy on the interweb, but each owner is happy to to chat if you would like an intro.  - DC

The problem: Steve's number one problem at UW Fitness was common; too much bad debt that he could not seem to make a dent in. No matter how revenues grew, there never seemed to be more money. He was paying himself less than he wanted to be, was consistently running into a cash crunch when taxes were due, and in fact owed back taxes. He was a one man show who need to add staff, but didn't know where the money would come from. His operating expenses were too high, which was robbing from his ability to address the shortage of cash in other areas.

The solution: After completing the Profit First Assessment for UW Fitness, we laid out a profit plan with the following goals:

Steve then implemented the Profit First cash management system fully into the business. The biggest immediate benefit was that debt payoff was accelerated and taxes were now accounted for. Steve gained clarity into how cash cycled in and out of his business, and got excited again about growing his business, which stopped being a "hope and pray" exercise. Three quarters into the process we created a test "staff account" to make sure adding to his team was something he could do without creating a cash crunch. Here are Steve's results over 6 quarters time:

This chart reveals Steve not only accomplished all 4 of our primary goals, he also was now able to add staff in order to grow. And the kicker? When we reviewed his debt load, since implementing Profit First he has paid off over $20,000 of business credit card debt and another $20,000 of personal loan debt. Steve's focused action shows the power of putting your Profit First.

Usually when I look at business financials and compare Revenue to Expenses, I see those lines run in parallel - As revenue goes up, so do expenses. At some point this becomes a losing game. Your top line looks good, but your profits (your bottom line) never appreciably increase. Only when we can create efficiencies in operations can we gain some separation in the two and start making more money. This is especially true in a service based business, where we need more people to deliver more services in order to create more revenue. Or do we? Take a look at this chart: 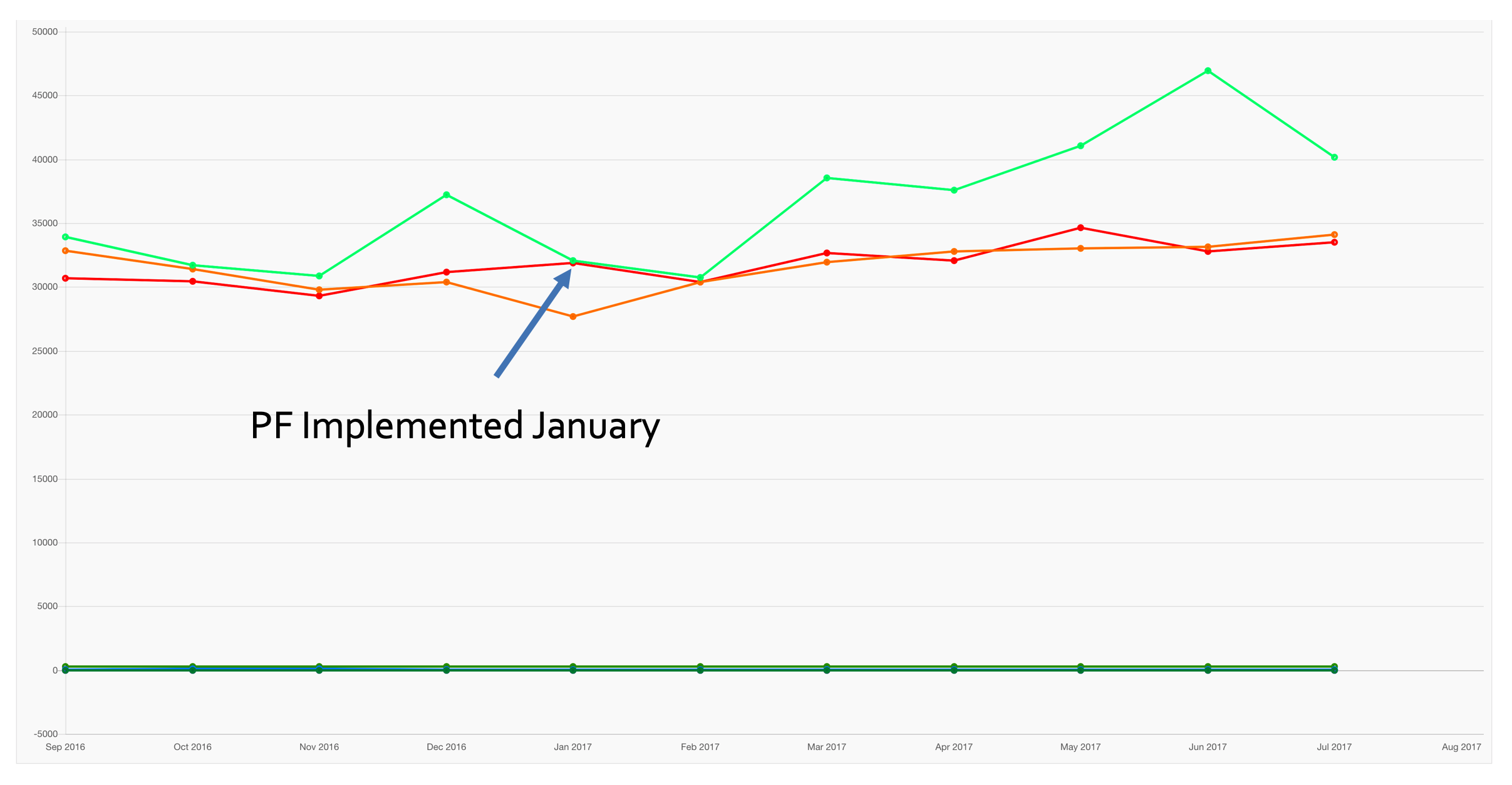 The green line represents sales revenue and the red line represents expenses (the orange line represents the amount of membership autopay). We can see for the most part the ratio of revenues to expenses stays fairly consistent, until about two month after Profit First is implemented. Where for a long time the business owner thought he was "stuck" until he added more staff, having a better handle on his finances and cash flow created the space to allow him to innovate and create a more efficient workflow, which resulted in more profits. See the gap increasing between the green and red lines? Here's the result in profitability: 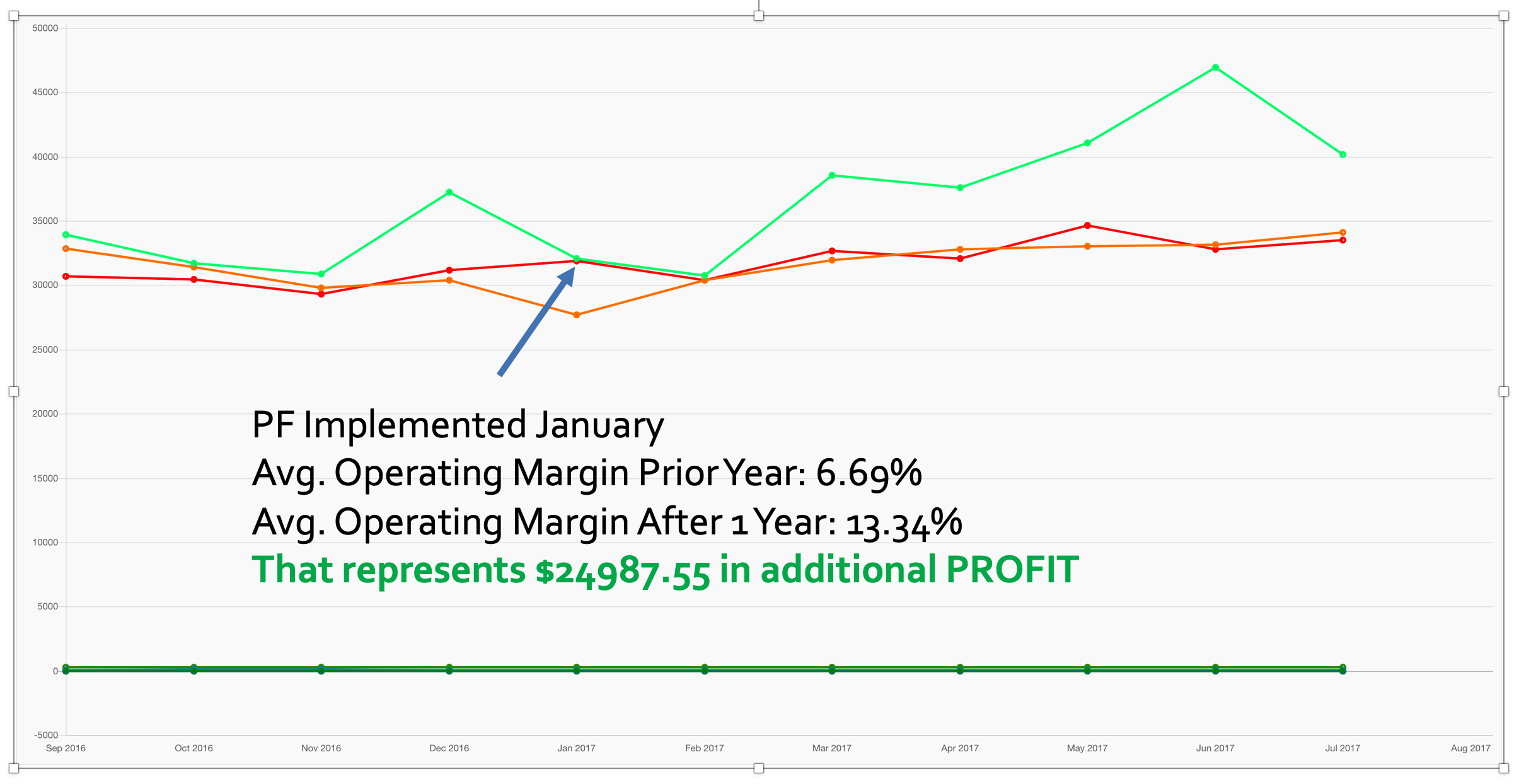 After 1 full year of implementing Profit First into their business, Fit Fitness nearly doubled their operating margin, resulting in nearly $25,000 additional profits year over year. And it hasn't stopped there. Fit Fitness increased their profit by over 27% from Q4 2018 to Q1 2019 alone. There can be a huge difference in building a bigger business and building a more profitable business. Having the systems and controls in place to scale profitably is key to making it happen. Fit Fitness is making it happen with Profit First.

This case study is near and dear to my heart, because this is a company I founded and sold after a decade, in a seven figure deal. Why is that relevant? Because running a more profitable business means when it comes time to sell, you have a more valuable business. And while I had run a profitable business from year one, implementing Profit First made it all the more valuable when we chose to sell. As we talked about in the "Fit Fitness" case study, even though we were increasing revenues, our margins, while still healthy, had actually gone down year over year from 2015 to 2016. That meant expenses were actually increasing faster than revenues, and that was a problem I wanted to solve as quickly as possible. Implementing Profit First at Get Fit NH did just that.

As you can see, net income almost doubled from 2016 to 2017. And the ramifications went far beyond that. Because this trend was continuing as we were in the sales negotiation process, the valuation of the business was over 30% more than it would have been just a few years earlier. That represented an increased value of over $250,000. I know we aren't talking hedge fund money here, but to a guy that started with one paying client in his backyard, that is pretty huge. Profit First has literally made me thousands and thousands of dollars.